by Dr. Edward Group October 23, 2019
Overview
Is It Safe?
Benefits
Side Effects 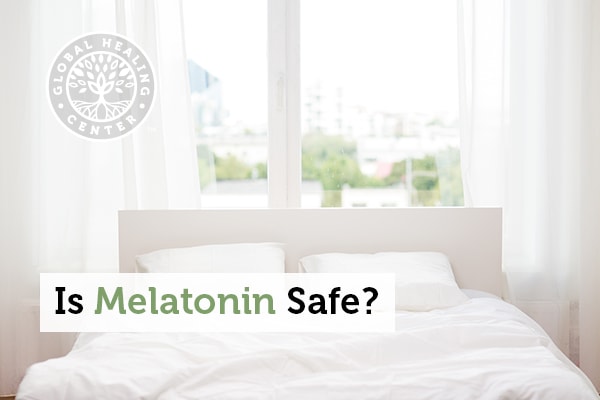 In the quest for a good night's sleep, some people turn to melatonin as a useful ally. Although your body produces this sleep hormone naturally, some people take melatonin in a supplement form. But is melatonin safe?

Whether you have a hard time falling asleep or staying asleep, melatonin may seem like a natural alternative to pharmaceuticals and over-the-counter sleeping pills.[1] While melatonin is generally safe for short-term use, taking it regularly over the long-term may worsen your sleep issues. Read on to find out why.

Melatonin has the nickname, “the Dracula of hormones" because it comes out in darkness; in other words, your levels are higher at night.

The amount of melatonin your body produces varies not only by the time of day but also by your age and other factors. Children make more of this hormone than adults. Production drops as you get older. Also, the amount of light that you're exposed to each day and how much you exercise affect your body's melatonin levels.[2]

According to data from the National Center for Complementary and Integrative Health, more than 3.1 million people take melatonin each year.[3] Almost half a million give it to children.

Where Can I Get Melatonin?

As a dietary supplement, you can find melatonin in capsule, chewable tablet, or liquid form. Time-release melatonin is a formula that delivers some to your brain when you first take it and more during the night to promote a normal sleep cycle.

Melatonin is generally safe for short-term use for most people — with some serious caveats for long-term use.[4] The main concern with supplementation is that prolonged daily usage can reduce the body's natural production of the hormone, which can make insomnia worse in the long run. And no one wants that.

A popular article titled "The Dark Side of Melatonin" discussed several concerns that the "father of melatonin" — MIT neuroscientist Richard Wurtman — raised about its use. "When used occasionally and at the correct time, melatonin is a fine means of encouraging sleep," the article states. "But, ironically, with prolonged use, it can actually amplify insomnia."[5]

The brain acclimates to its use, and your body produces less because it is receiving it supplementally. Thus, you should not take it day in and day out, but only occasionally. There are natural herbal sleep remedies that may work more effectively and in a safer manner. See below.

Sleep is essential for health, affecting everything from your immune system to memory. If you are not getting at least seven to nine hours per night, find ways to get more.

Melatonin is most known for its role in promoting slumber, but its benefits don't end there. These are the top six benefits melatonin provides.

Most of us know melatonin is the “sleep hormone.” It helps you fall asleep faster, increases total sleep time, and improves sleep quality.[1] These improvements are modest yet consistent.

On average, people taking melatonin fall asleep seven minutes faster and have eight minutes more sleep time. This may not seem like a lot, but these are average figures for many people — and it adds up!

Taking melatonin does not guarantee you’ll get deeper sleep or won’t wake in the middle of the night, however.[6] And, as mentioned above, taking it regularly may lead to more insomnia over the long-term.

Hormones often serve more than one purpose. Besides its function in the sleep-wake cycle, melatonin also supports a healthy immune system.

Melatonin acts as an immune system buffer, which means it stimulates or tones down the immune response according to what the body requires.[7] It may also boost the production of cells involved in immune function, like NK cells — critically important cells that shut down harmful virus-infected or over-proliferating cells.[8]

Melatonin acts as an antioxidant, which means it prevents oxidative cell damage. The hormone binds to "reactive oxygen species" and nitrogen free radicals, which can otherwise damage cells.

Melatonin's antioxidant powers are called "uncommonly effective" in reducing oxidative stress under a variety of conditions.[9] Its effects work most strongly in the central nervous system and brain where melatonin is produced, as well as in the heart.[9, 10]

Melatonin also binds with toxic metals. Its role in binding and removing free radicals and metals may explain why it reduces disrupted sleep.

Given melatonin's role in neutralizing free radicals, researchers started looking at its possible role in various neurological conditions. It turns out that people with Alzheimer's disease, Parkinson's disease, and stroke all have lower melatonin levels. Could supplements help?

Indeed, melatonin's antioxidant and anti-inflammatory properties may protect the brain against these age-related neurological conditions.[11] What’s more, melatonin may reduce confusion and restlessness in people who already have these neurological issues.

5. Acts as a Stress Buffer

This natural hormone may play a role in relieving stress and improving mood by regulating the body's circadian rhythms.[12]

Note that this benefit is not connected to taking supplemental melatonin, but rather the hormone’s natural role in the body. When under stress, your melatonin levels may decline. When they are lower, you can’t sleep as well. It’s during these temporary, short-term times of stress that supplemental melatonin might help you get more sleep.

Traveling across time zones can disrupt your internal clock and circadian rhythms, making it difficult to fall asleep when you want to. Jet lag is the name for this frustrating condition, which can leave you exhausted.

When people take melatonin close to their desired bedtime, it resets your internal clock, helping you fall asleep earlier.[13] It is particularly helpful with eastbound travel across time zones.

When Should You Take Melatonin?

It is best to take melatonin as a dietary supplement in the evening, around two hours before bedtime (preferably at night).

Taking it a couple of hours before you go to sleep gives it time to get into your system and to complement your body’s natural production. If you sleep during daytime hours, such as night-shift workers, you may want to consider an alternative natural sleep remedy.

More than 400,000 children take melatonin, but since melatonin is a hormone, exercise caution in giving it to children and adolescents.[3] More research will help us understand if it is safe for pregnant and breastfeeding women. Consult your healthcare provider for advice.

Melatonin also interacts with medications that include hormones like birth control pills, and those that cause drowsiness, such as sedatives.

For most people, the only “side effect” is the desired drowsiness, but some people experience the following:

If you are one of the people who get these side effects, melatonin can actually disrupt sleep instead of improving it.[14]

Intermittent use of melatonin should not lead to addiction or rebound insomnia.[15] However, if you take it frequently, your body may reduce its own production, making insomnia and sleeplessness worse.

Most supplements contain very high levels of melatonin such as 5 to 10 milligrams, far more than the body produces naturally. Any time you ingest substances that are considered a hormone, it has the potential to upset the delicate balance of other hormones.

The healthiest choice is to teach your body to increase its own melatonin production by developing healthy sleep habits.

Should You Take Melatonin?

Before taking any supplement, you should always try behavioral solutions first. Figure out what factors are disrupting your sleep and what you can change.

For example, do you drink caffeinated coffee or tea after lunchtime, which may keep you awake at night? Is stress causing your mind to stay "on" when you try to sleep? Are you taking steps to reduce stress, such as meditation and exercise?

Turn off your cell phones and avoid computer screens at night because the light they emit can neutralize the effects of melatonin. Some people wear dark orange-tinted glasses after sundown, which may stimulate the body's natural production of melatonin. Others drink tart cherry juice, which contains naturally occurring melatonin.[16] Although tart cherries are one of the most concentrated food sources of melatonin, a typical serving contains only around 85 micrograms, compared to 500 mcg in a supplement.

Produced naturally in the pineal gland, melatonin is a hormone that plays a vital role in the body's sleep-wake cycle. The levels of this hormone increase at night, giving it the nickname the Dracula of hormones. Melatonin production tends to decline as you get older.

Melatonin supplements, usually taken in pill form, can help you fall asleep faster and improve your sleep quality. They also have additional health benefits such as supporting the immune system, protecting against neurological disorders, and acting as an antioxidant to prevent cell damage.

In addition to alleviating sleep-related conditions such as insomnia and jet lag, this hormone may also alleviate anxiety and improve mood.

However, taking melatonin supplements may have some unwanted side effects. Specifically, taking it supplementally may make your body reduce its own natural production, especially if it’s taken long-term.

An alternative herbal sleep remedy without these side effects is valerian root, a time-tested herbal remedy for restful slumber.