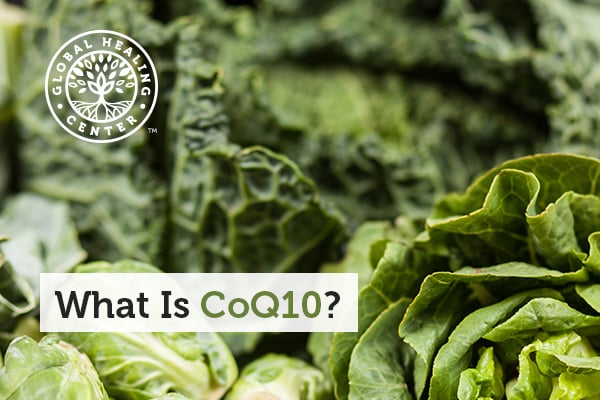 If you're looking for a supplement that can help you feel energized, promotes healthy aging, and keeps you feeling your best, look no further than CoQ10. Supplemental CoQ10 benefits include increased energy levels, healthy and youthful-appearing skin, mental sharpness, and immune system support.[1]

Naturally produced by the body, CoQ10 has many roles, including helping convert the food you eat into energy that fuels your brain and body.[1] Because levels decline as you age, some people like to boost their body's supply by taking a CoQ10 supplement. Its antioxidant properties can help protect your body from harmful free radicals.[1]

That's not all. Read on to learn more about how this important compound can support your overall health and well-being.

Did you know CoQ10 is found in every cell throughout the body?

Your mitochondria produce something called ATP (adenosine triphosphate), which stores and transfers energy to every living cell in your body.[2]

CoQ10 plays a role in producing ATP, so in a sense, it's like a cup of coffee for your cells! Maintaining sufficient levels of CoQ10 boosts cellular energy production and keeps your systems and organs functioning as they should.[1]

CoQ10 also acts as a powerful antioxidant, protecting your cells and tissues from harmful free radicals.[1]

You'll find CoQ10 in every cell throughout your body; however, it concentrates within the organs that require the most energy, including your heart, kidneys, and liver.[1] Your brain also uses a lot of CoQ10! However, its production declines with age.

Though technically not actually a vitamin, some people refer to CoQ10 as "vitamin Q," since it has vitamin-like qualities. Let's explore some of the health benefits this impressive antioxidant offers.[3]

Heart troubles can have a big impact on your quality of life. Thankfully, long-term studies suggest that CoQ10 is beneficial for heart health.

In Sweden, researchers studied 400 healthy individuals over the age of 70. Half of the group were given CoQ10 and selenium (another antioxidant), and the others were given a placebo pill for four years.

At the end of the study, the CoQ10 group had fewer serious heart concerns, and healthier hearts compared to the placebo group.[4]

Feeling less energetic and chalking it up to being "older?" You may have a CoQ10 deficiency. Declining CoQ10 can zap your energy levels.

Maybe it's time to use CoQ10 as your afternoon pick-me-up!

When you take extra CoQ10, you spark the production of your body's cellular fuel (ATP), which recharges your system. Fueling your cells may boost your energy levels. This helps you get through the day with less fatigue.[1]

So far, scientists have found that CoQ10 improves endurance in individuals living with cardiac health concerns, particularly during exercise.[7]

As you age, your body requires extra care. The best way to care for your body is through a diet rich in plant-based foods, regular exercise, and healthy stress-management techniques. But, sometimes our bodies can use a little extra support.

Older adults are more vulnerable to harm caused by oxidative stress — an imbalance between free radicals (cell-damaging molecules) and your body's innate ability to prevent the harm they cause. Thanks to its antioxidant qualities, CoQ10 helps protect the body from these harmful free radicals.[8]

Did you know that CoQ10 may help improve your quality of life?

In a clinical trial, older adults took both selenium and CoQ10 for four years. Individuals who consumed the CoQ10-selenium supplement had fewer health issues requiring hospital visits. Participants reported improvements in physical performance, vitality, and even quality of life.[9]

You've likely heard that doing a daily crossword puzzle can help keep you mentally sharp well into your golden years. CoQ10 may have a similar effect.

Researchers have discovered that laboratory cells pretreated with CoQ10 have the potential to protect themselves better against neuron and oxidative damage.[11]

CoQ10's antioxidant nature allows it to bolster the body's defense against oxidative stress in your brain cells, keeping your brain sharp.

You use your joints and muscles for movement and everyday physical activities. Over time, these body parts encounter wear and tear. As a result, you may occasionally experience muscle weakness and sore joints.

Researchers have explored how CoQ10 can reduce the effects of strain and discomfort in joints and muscles caused by injury or fatigue.

It turns out that CoQ10 might have a therapeutic effect on joints by minimizing cartilage degradation, easing joint discomfort, and promoting overall joint health and wellness.[12]

Headaches are a common concern in all age groups.

In older adults, the prevalence of headache ranges anywhere from 12 to 50 percent. Frequent headaches occur in up to 17 percent of people aged 65 and older.[14]

It may be time to add CoQ10 to your protocol for occasional headache relief!

Some promising new research found that CoQ10 may offer relief by promoting normal levels of inflammatory cytokines — chemicals in the body that affect head discomfort.[15]

As a result, those people taking CoQ10 had fewer headaches; among those who did experience head discomfort, it was less severe and did not last as long.[15]

We all know and expect wrinkles with age — laugh lines are a sign of a well-lived life. But that doesn't mean we don't want to keep our skin looking as youthful as possible.

Skin becomes more vulnerable to damage as you age, due in part to the lower levels of CoQ10 in the body.

The solution? Take CoQ10 to make up for deficiencies — and keep your skin healthy and youthful.

Reduce the appearance of wrinkles and fine lines by taking CoQ10 supplements!

In a clinical study, researchers found that individuals who took a CoQ10 supplement for 12 weeks had "significantly reduced wrinkles and microrelief lines, and improved skin smoothness."[17]

As a result, you'll find CoQ10 listed as an active ingredient in many skin care products, such as creams and toners.

Sore, bleeding, and receding gums can cause discomfort and may even interfere with enjoying life to its fullest. They also occur more with age.[18]

It turns out that CoQ10 can help reduce chronic redness and swelling in the mouth, supporting oral health.

With its ability to help cells produce energy, CoQ10 boosts tissue repair within the gums to keep your mouth healthy.[19]

If dry mouth is a concern, CoQ10 can help with that, too! Dry mouth is often experienced by older adults, as saliva production tends to slow down with age.[20] A clinical trial showed improvement in dry mouth in individuals who received a CoQ10 supplement.[20]

Your immune system keeps you healthy, and it's important to do what you can to help keep it strong.

Your first line of defense is to live a healthy lifestyle — eat whole, plant-based foods, exercise, and get plenty of sleep. Still, there are times when your immune system may benefit from extra support.

CoQ10 helps your body produce the energy to keep your immune system working as it should, helping you stay healthy.[1]

10. May Improve Your Workouts

Great news! You may feel less tired after workouts with a good CoQ10 supplement.

Are you looking to get the most out of your time in the gym? CoQ10 may help with fatigue — both during and after your workout.

One study found that people who took CoQ10 for just a week were able to pedal faster while riding a bike and felt less tired after the workout.[22]

CoQ10's effectiveness in this area is not completely certain. Some studies found that CoQ10 did not affect fatigue or performance during exercise.[23]

Endurance athletes or those doing high-intensity training may require larger amounts of CoQ10 in order to fully feel an energy boost and less post-workout fatigue.

Wow! Did you know that CoQ10 levels in your retina decline by 40% as you age?

If you'd like to avoid picking up a magnifying glass to read the newspaper in the future, consider supplementing with CoQ10 to support your eye health throughout life.

Researchers discovered that CoQ10 protects your eye's retinal cells against oxidative stress — which can otherwise restrict blood supply to your retina and cause damage.[24]

Your retina is a thin layer of tissue on the back of your eye that converts light into an electric signal relayed to your brain through the optic nerve. Your brain then translates the electrical signals into the images you see.

CoQ10 levels in the retina decline by 40 percent with age, which may contribute to vision troubles. Your eye health may benefit from CoQ10 supplementation even before any eye issues begin.[25]

Studies have found that people with lung issues and breathing concerns tend to have low levels of CoQ10 in their bodies.[26]

CoQ10 supplements improved performance and tissue oxygenation in individuals with lung issues during exercise and at rest.[27]

Do You Have a CoQ10 Deficiency?

Most of us are aware of vitamin deficiencies. Did you realize you may also become deficient in CoQ10?

Some of the signs and symptoms that you may have a CoQ10 deficiency include:[28]

Talk to your healthcare provider if you're worried that you may have a deficiency; they may do a blood test to determine your CoQ10 levels.

Eating a diet rich in CoQ10 and taking a supplement are two options to increase levels in your body.

While you can ensure you are getting proper amounts by taking it as a supplement, dietary sources rich in CoQ10 include:[28]

The best way to ensure you get the maximum benefits of CoQ10 through food sources is to consume these foods raw.

Which Is Better: CoQ10-Rich Foods or a Supplement?

Although an organic, plant-based diet that includes CoQ10-rich foods is good for your health, taking a CoQ10 supplement is the best way to ensure you consistently get enough, especially as your natural production slows with age.

Environmental toxins in the body, coupled with age or illness, may call for higher levels of CoQ10 than food alone can provide.[29]

Over-the-counter supplements come in two versions — CoQ10, which is also called ubiquinone (an oxidized form) and ubiquinol (a non-oxidized form). When you take ubiquinone, your body will convert it to ubiquinol.

CoQ10 itself is a safe and effective supplement that should be taken with a fat-containing meal for best absorption.

I recommend Global Healing’s CoQ10 & BioPQQ® with Shilajit — an exclusive blend of three ingredients that combines the most well-researched CoQ10 on the market with BioPQQ, a compound that acts like a cup of coffee for your cell’s mitochondria, plus shilajit — a mineral-rich Himalayan substance that boosts the bioavailability of the other two ingredients. Altogether, this trifecta provides an energy boost at the cellular level.

You may want to consider taking vitamin B-6 along with your CoQ10; research shows the body requires an adequate level of vitamin B-6 in order to synthesize CoQ10.[30]

The benefits of CoQ10 supplementation are plenty. Side effects, although rare, may occur with people who take larger servings of CoQ10, or those just starting the supplement.[28]

These side effects include:

Dividing daily servings into two or three smaller portions may help reduce side effects. Be sure to follow the instructions included with your supplement, and don't take too much.

The safety of CoQ10 in pregnancy has not been thoroughly tested, so it is best not to take supplemental CoQ10 during pregnancy.

As we learn more about CoQ10, more people are choosing to use it as a daily nutritional supplement for its multiple health benefits. Research from the thousands of studies conducted on the compound have shown that CoQ10 can:

With CoQ10's few side effects and many benefits, this supplement is great for improving overall health and wellness.

Whether you want to stay mentally sharp as an older adult, increase your fertility, support your heart health, or boost your energy levels, CoQ10 is a supplement worth considering.