由 Dr. Edward Group 2019年10月28日
Overview
Top Supplements
Which One Is Right For You? 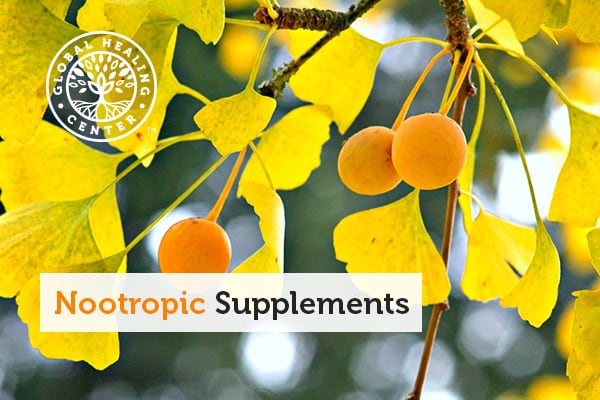 If you want a nutritional supplement to enhance your brain function — short-term memory, focus, creativity, mood, or motivation — look for a nootropic. The term nootropic comes from the Greek root words nóos (mind) and tropé (turning). Natural nootropics can help older adults stay sharp, students who want to improve their memory for upcoming exams, or busy workers who need a boost of creativity.

Having good mental health is more than just the absence of illness. It also involves having a positive mood with enough energy and mental clarity to make the most out of life. That's not always easy. Daily pressures and environmental toxins can lead to anxiety, fatigue, and brain fog — even when you follow a good diet-and-exercise routine. Supplements are a great way to add specific health-boosting nutrients to your diet so you can optimize your health.

If you drink coffee or tea to jump-start your day, you're using a nootropic without realizing it. Nootropics, sometimes called cognitive enhancers, brain boosters, or "smart drugs," are compounds that affect your central nervous system. They have an enhancing effect on one or more aspects of your mental state. These substances target "executive function," which means attention, learning, memory, alertness, and motivation.

Nootropics affect the brain in different ways. Some influence your neurotransmitters. Others increase blood flow, oxygen, and nutrient levels in the brain. Others protect you from the effects of toxins and free radicals. Some even promote the growth of new neurons (brain cells) and brain cell connections that help you adapt to change.[1]

Most people know that food gives your body nutrients, such as vitamins and minerals. But most typical modern diets lack variety. Unlike our ancient relatives who wandered through natural habitats, browsing on various plants, herbs, roots, and berries for adequate nutrition, most people living in modern society have unvaried diets full of meat, wheat, corn, soy — and a multitude of processed foods.

Adding nutritional supplements to your diet can broaden the variety of nutrients, antioxidants, and beneficial phytochemicals you get. This can improve your brain function and overall health.

Nootropics compounds are either natural or synthetic (human-engineered). People have used natural nootropics since ancient times. Some of these substances grow in the wild, but people also cultivate them as crops. You can also find them in foods as well as dietary supplements available in capsule, liquid, or powder form.

Herbs and other plants, amino acids, and minerals all have nootropic uses. Most don't act as dramatically as synthetic ones — but that quick-acting benefit of synthetics often comes with numerous side effects. Natural products, in contrast, come with more overall health benefits because the nutrients are typically high in antioxidants and support the brain’s response to inflammation. When you take a natural nootropic regularly, you’ll see more noticeable effects. They are generally safe when used as directed.

Natural nootropics include herbs, minerals, and other nutraceuticals. The following are a few of the most effective and time-honored nootropics you can find.

Caffeine is the world's most consumed nootropic. Think about it. You wake up groggy, and then have that morning cup of Joe to get your mind awakened and alert. That’s a clear example of how a nootropic works!

Caffeine is found naturally in coffee, tea, cacao beans, and cola nuts. As a stimulant, it can reduce fatigue, enhance alertness, energy, and concentration.[2] Caffeine can also promote a positive mood. It's rich in antioxidants, which fight damage from disease-causing free radicals. But be careful; its stimulant effects can increase blood pressure and heart rate in some people.

Caffeine perks you up by blocking the brain receptors for adenosine, a chemical that causes sleepiness. It also speeds up nerve-cell action and increases the "feel good" neurotransmitter dopamine.

Also called winter cherry, ashwagandha (Withania somnifera) is an adaptogenic herb. In other words, it helps your body and mind manage stress better. It may even ease occasional anxiety.

Another herb used in Ayurvedic medicine, Bacopa monnieri or brahmi, enhances memory and reaction time.[4] It also may help with learning and information processing.

Bacopa contains bacosides, antioxidants that protect your brain from free-radical damage. Bacosides also boost signals in the parts of the brain that process memories.

The leaves of the ginkgo tree are popular in traditional Chinese medicine. Many people take ginkgo to stimulate mental performance or focus.[5]

Ginkgo biloba may enhance brain function by improving memory and the processing of information. Others say it helps them stay calm. Ginkgo is also an antioxidant. Its effects include improving blood flow to the brain and promoting normal stress hormone levels in healthy people.[6]

Commonly known as velvet bean, Mucuna pruriens is used in ancient Ayurvedic medicine as a brain stimulant. Also an adaptogen, it counteracts stress in the body and mind.

Modern science has discovered that this bean contains L-dopa, a precursor to several neurotransmitters that affect mood and cognition.[7] It also contains several strong antioxidants that counteract oxidative damage in the brain.[8, 9]

This flowering shrub is an adaptogen that boosts mood and reduces fatigue.

Part of traditional herbal medicine, Rhodiola rosea may help the mind and body handle stress so you can perform better.[10] Rhodiola has mental health benefits, too.

This herb contains salidroside, an antioxidant, and rosin, which promotes a normal response to inflammation. These natural compounds support brain health, reduce fatigue, and improve mood.

L-theanine is an amino acid (the building blocks of proteins in your body). It is a component of black and green tea, and you can also find it in moringa leaves. Some people buy L-theanine as a standalone dietary supplement.

This amino acid helps your body regulate hormones and neurotransmitters that positively affect how you feel and think. It can relax you without causing drowsiness.

L-theanine also has an unusual trait: It increases alpha waves in the brain, associated with deep relaxation and creativity.[11] You can enhance its “mellow yet sharp" effects by taking it with caffeine.[12]

Pyrroloquinoline quinone or PQQ is a naturally-occurring chemical compound in your body. It is one of the compounds known to boost brain’s nerve growth factor (NGF), supporting brain health, memory, alertness, and focus.[13] BioPQQ is the most-studied PQQ supplement available, with an excellent safety record.

Taking BioPQQ with CoQ10 (coenzyme Q10) — a molecule that helps create your cell’s mitochondrial energy — provides one of the most effective nootropics available. CoQ10 & BioPQQ® with Shilajit is a synergistic blend of these two nootropics that provides advanced antioxidant support while boosting heart and brain health.

Your brain also needs certain minerals to operate at its best. Make sure you get enough of these "brain minerals."

Lithium is an essential trace mineral linked to new brain cell growth.[14] Lithium orotate is a molecule comprised of the lithium mineral bound to orotic acid. Not only is lithium orotate extremely safe, it can calm daily stress and promote peace and calm.[15]

Calcium ions help the nervous system transmit messages. This mineral also plays a role in how you store and retrieve memories.[16] Calcium regulates levels of neurotransmitters and affects neuron "excitability." You can find calcium in beans and leafy greens such as kale or as a dietary supplement.

A partner to calcium in nerve cell excitability and message transmission, magnesium also plays a crucial role in brain and nervous system function. Raising magnesium levels — particularly in the millions of people who are low in this essential mineral — improves brain function, including focus, memory, mood, and energy.[17] Magnesium can also improve your sleep and relax tight muscles!

The mineral zinc protects the brain, supporting normal brain function and a positive mood. Many people are low in zinc. Taking a supplement or getting more in your diet can support healthy brain function, better mood, and overall cognitive performance. Zinc also supports the immune system and helps your body make DNA and proteins. This mineral is abundant in pumpkin seeds, greens, grains, and beans.[17]

Which Supplement Is Right for You?

When choosing a nootropic, consider the type of effect you're seeking — stimulating or relaxing? Do you want to improve your memory or gain energy? Whichever you're thinking of taking, I recommend purchasing only natural, organic supplements from a trusted brand.

Everyone responds a little differently to nutritional supplements, and they are not all the same strength. When you try one, take a low amount to start. Make sure to talk to your healthcare provider, especially if you are pregnant, have a serious health condition, or are taking medications.

Nootropics, or cognitive enhancers, are compounds that affect your central nervous system and may improve your mental state and overall functioning. They can be synthetic or natural, but nootropics found in nature are safer and many offer nutritional benefits as well. Their effects range from increased alertness and reaction time to better memory and reduced daily stress.

The best way to choose a natural nootropic is to decide the effect you're seeking and then take the lowest effective dose.