The Link Between B12, Brain Function, and Memory 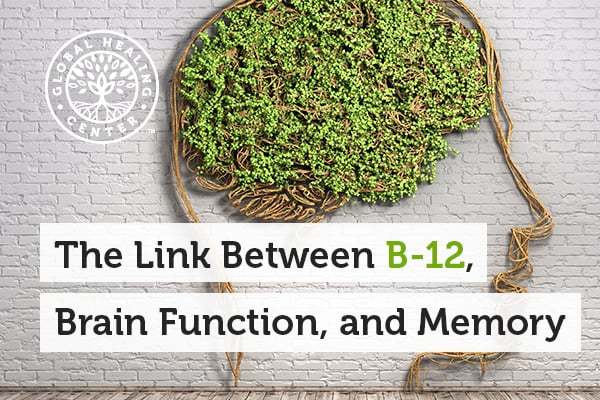 Due to vitamin B12’s association with energy metabolism, you might wonder what purpose it serves in your brain’s health and memory. There are a few complex roles that this B vitamin participates in — beyond releasing energy — that play a role in neurological function. This article will shed light on the primary reasons B12 is indispensable to healthy brain aging.

Vitamin B12 primarily functions as an enzyme cofactor. This role includes the production of red blood cells, the synthesis of myelin (a protein that coats nerves), genetic expression, amino acid balance, and the detoxification of hormones, neurotransmitters, and other chemicals. These activities are essential to maintaining brain function and preventing memory loss and cognitive decline.[1, 2]

B-12 Deficiency and Cognitive Impairment

A number of brain diseases are associated with low B12 status, particularly conditions characterized by cognitive difficulties like muddled thinking and forgetfulness. But the precise mechanism wasn’t identified until relatively recently. Researchers and doctors are beginning to see that cognitive issues associated with advanced age might be due, at least in part, to undiagnosed low B12 status.[1, 3]

Brain atrophy is a normal part of the aging process, but years of unhealthy diet and lifestyle choices can worsen the decline. Nearly 23% of Americans who reach their 70s will develop at least some degree of cognitive impairment. For far too many, this is an irreversible, progressive decline that requires specialized care by family members or costly facilities.[4, 5]

One study found that low B12 status was associated with poor memory. Remarkably, older adults with insufficient B12 had structural anomalies in the region of the brain most associated with memory, the hippocampus.[2] Emerging research has found that B vitamin supplementation — specifically with folate, B6, and B12 — slows the progression of brain tissue loss and cognitive impairment. These benefits are limited to those with a low B vitamin status. If you already have normal serum levels of these B-vitamins, adding extra doesn’t seem to have any beneficial effects on brain health.[3, 6] That said, a variety of factors increase the likelihood of poor nutritional status in aging populations.

A Primer on B12 Absorption

From food to cell, B12 meanders through a complicated, multi-step route, meaning that adequate intake isn’t the only factor that determines whether you have enough in your body. Your B12 status is determined by how much you get in your diet, how well your digestive system frees the vitamin from food, how much you can absorb from your small intestine, and how easily you can convert dietary B12 to an active form your cells can use.[7]

B-12 attaches and detaches itself to and from several carrier proteins along this route with the aid of digestive juices. Essentially, it needs to catch several different buses to reach its destination, i.e., before it can be absorbed from the digestive tract into your body. It first attaches to R-factor (haptocorrin) in your saliva and is then cleaved from this complex by the hydrochloric acid in your stomach. From here, B12 binds to intrinsic factor (IF) at the beginning of the small intestine. The last stretch of the small intestine absorbs the IF/B-12 complex, transporting it across the intestinal wall and inside the body. Before the vitamin circulates in your blood, it has to decouple from IF and join another carrier protein called transcobalamin. Once attached to transcobalamin, it travels to where it’s needed in the body. Once it makes its way inside individual cells, it may require further processing if it’s not in its active form.[7]

Absorption of B12 in Older Adults

As we age, we begin to slow down in more ways than one. Organ function becomes less efficient, a consequence that extends to the stomach. As many as 30% of older adults develop a condition called atrophic gastritis, or achlorhydria. This condition means that the stomach secretes less acid with which to digest food. Without gastric acid, B12 is not able to separate from R-factor and bind to IF for absorption, preventing B12 absorption despite sufficient dietary intake. To analogize, the B12 you ate can’t get off the bus (R-factor), as it drives past the exit for the airport and misses its flight from the digestive system into the blood.[8, 9]

Elderly populations also manifest a lifetime of damage and immune and organ decline that leads to decreased B12 absorption. The specific health issues that contribute to low B12 status include intestinal inflammation, autoimmune disorders that prevent the production of B12 carrier proteins, damage to the wall of the intestine, hostile gut organism overgrowth, pernicious anemia, and certain medications.[9]

Age-associated Factors That Affect B12 Status

With age, the body’s ability to absorb and use vitamin B12 can change. Below are common, age-associated factors that affect B12 status.

B-12 status intersects with brain health a few different ways. Inadequate B12 in the body promotes brain shrinkage and atrophy (similar to muscle wasting), harms cardiovascular health, and decreases your brain’s ability to break down hormones and neurotransmitters.

The Neurological Effects of B12 Deficiency

According to the NIH, B-12 deficiency manifests as the following neurological symptoms:[2]

Low B12 status accelerates mental decline by inhibiting the methionine cycle, a process that converts the essential amino acid methionine into other amino acids to build proteins. You need folate, B6, and B12 to convert the nonessential amino acid homocysteine into methionine. Homocysteine is a normal metabolic product, but it also comes from diets that contain excess animal protein. With inadequate B12, the homocysteine levels build up in your blood and brain, leading to nerve damage, delayed communication between nerves, and brain shrinkage.[4, 10]

Low B12 status also decreases the production of a prolific detoxifier called SAMe (S-adenosylmethionine), a cosubstrate involved in the modification of other molecules. SAMe donates a piece of itself, its methyl group, to other molecules. Estrogen, neurotransmitters, and other chemicals require this methyl group to break down into safer molecules for recycling or elimination. When you don’t have adequate B12, you cripple the production of SAMe; impeding this detoxification process contributes to a buildup of unnecessary molecules in the brain and degraded neural tissue.[10]

Low B12 status appears to significantly depress production of neurotransmitters such as norepinephrine, serotonin, and dopamine. It acts as a coenzyme during the synthesis of these neurotransmitters, so a deficiency limits your brain’s ability to produce these important chemical signallers. This effect disrupts emotional stability and can affect your sleep quality.[1, 11]

Reduces Blood Flow to the Brain

Healthy Brain Aging With Adequate B12

B-12 supplementation offers promise for supporting normal brain health. A 2010 Oxford study on older adults found that B vitamin supplementation over the course of two years slowed brain atrophy by an astonishing 30%. Participants with the highest levels of homocysteine responded with a remarkable 53% reduction in brain atrophy when compared to the placebo group.[3, 4]

If you’re in the market for a safe, natural B12 supplement, I highly recommend Global Healing’s own Vitamin B12. This supplement is made from 100% vegan sources and contains a blend of methylcobalamin, adenosylcobalamin, and hydroxocobalamin.

Staying Sharp at Any Age

Taking your B vitamins isn’t the only way to keep your brain healthy throughout your lifetime. A healthy diet and regular exercise keep your arteries strong and flexible so that they can carry necessary nutrients to your brain. If you smoke, keep in mind that you’re not only harming your lungs; the effects of smoking also extend to your brain. One study found that smoking has debilitating effects on memory, processing speed, and general brain function.[15]

Meditation and stress management are — pardon the pun — a no-brainer when it comes to your cognitive health.[16] I also highly recommend lifelong learning as another way to delay age-associated cognitive decline. Challenging your mind, even well into adulthood, forms new neural connections in the brain that safeguard against these kinds of difficulties.[17]